Rías de Galicia: A Garden at the End of the Earth from the Spanish Tourist Office

The garden will evoke, on a small scale, the extraordinary landscape of the Rías De Galicia, the estuaries on the rugged Galician coast. Here, surrounded by uncrowded white beaches and turquoise waters, a series of large rivers meet the Atlantic, an area which in times past was believed to be the End of the Earth. 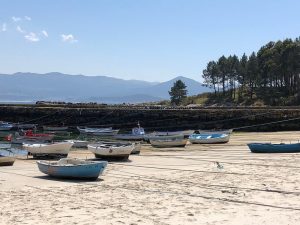 Secluded coves are dotted throughout this region and, in her third RHS Hampton garden for the Spanish Tourist Office, named ‘Rías de Galicia: A Garden at the End of the Earth’, Rose will be celebrating these coastal havens, their wild flora and the local tradition of shell-cladding. The garden will also give a nod to the delicious local seafood.

Visitors will be transported to a small cove, sheltered by two coastal pine trees. A path winds up from the beach, past a crumbling sea wall, through a selection of salt-resistant shrubs, rock plants and flowering grasses, to a weather-beaten fisherman’s cottage. Traditional Galician cooking pots act as plant containers filled with bay and geranium, and a pantiled roof is weighed down with stones to protect it from the Atlantic gales. A rock pool nestles in the boulders filled with colourful pebbles and shells. In the shallows, a small fishing boat is beached, ready for its next trip out to harvest the rich abundance of seafood of the Rías De Galicia. 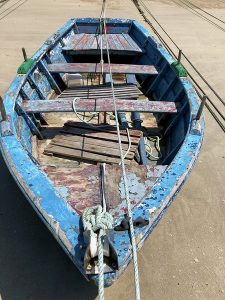 The garden’s backdrop will depict distant hazy mountains of Finisterre using a panelled art installation filled with scallop shells to form an impressionist collage. Historically, the walls of buildings in the region were often clad in porous scallop shells to reduce humidity inside. The scallop shell is the sacred icon of the pilgrims on the nearby Camino to Santiago de Compostela and is the symbol of St James himself.

Shells will be scattered on the beach and traditional mussel baskets, nets and Galician lobster pots will be in the boat and undergrowth.

Although the garden will evoke the spirit and romantic beauty of Galicia, it will use plants which can be easily bought in the UK, so ideal for show-goers to use in their own outdoor spaces, particularly those with extremely free-draining soil or who live in exposed sites or near the sea. Succulents such as sedums (stonecrop), saxifrage (rockfoils) and sempervivum (houseleeks) will feature with eryngium (sea hollies), armeria maritima (sea thrifts), stipa (grasses), plus rosemary, thymes, fennels, tansy and tamarisk. Many plants growing in Galicia also thrive quite happily in sheltered parts of the UK. 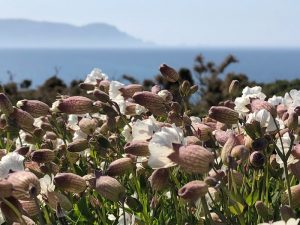 Designer Rose McMonigall said: “Falling at the brink of the summer holidays, I always think RHS Hampton Court has a happy atmosphere, vibrant with colour and thoughts of long, lazy days outside. I’m so excited to be creating a garden which paints a picture of an idyllic scene, a secluded beach on the Atlantic coast of Galicia, glimpsed through pine trees, with the ultimate hideaway of a fisherman’s cottage nestled amid the wild-looking vegetation.

“I’ve aimed to create a garden rich in atmosphere but using a palette of plants that can be used in any garden, especially with sandy, rocky or coastal conditions – an Impressionist memory of happy seaside holidays in your own special space at home.”

Javier Piñanes, director of the Spanish Tourist Office in the UK, said: “In collaboration with the region of Galicia, we are delighted to be collaborating with RHS Hampton Court Palace Flower Show and garden designer Rose McMonigall this year. Galicia is a very unique, spiritual and cultural destination with an outstanding coastline strung with dramatic cliffs and pretty fishing ports. The interior offers a labyrinth of valleys and hills and is of Spain’s most green and vibrant regions. We are excited to be bringing a slice of Galicia to London this year and look forward to showcasing some of the highlights at the Flower Show.”

This will be the third garden Rose McMonigall has designed for the Spanish Tourist Board at RHS Hampton. Last year she created The Pazo’s Secret Garden and in 2016 The Route of the Camellia both of which were award silver gilt medals.

For more information on the region of Galicia, please visit http://www.turismo.gal/inicio

The Spanish Tourist Office is represented by LOTUS (spain@wearelotus.co.uk)

Recreate your own Galician ‘pazo’ garden as seen at RHS Hampton

The Spanish Tourist Office is showcasing the mystery and romance of Galicia’s ‘Pazo’ gardens at RHS Hampton Court Palace Flower Show this July. Show garden designer, Rose McMonigall, shares her tips on recreating the look in your own garden.

The historic Galician Pazos are magnificent palaces famous for their exquisite architecture and extensive gardens, where formal design meets the untamed nature of Galicia’s landscapes.

Often mysterious and dripping with greenery, with mists enshrouding them in the cooler months, softening the edges of their often highly formal design, these gardens blend with a larger, more practical landscape, where the productivity of the land is as important as its aesthetic appearance. Vines tangle amid the ornamentation to yield harvests producing some of Northern Spain’s best wines.

“The climate of Galicia is very similar to that of the UK” says Rose, “and the plant life that thrives in northern Spain is not dissimilar to that which we enjoy here, so why not try to achieve the ‘Pazo’ look in your own garden?”

Rose provides her top tips for bringing a little bit of Galicia to Britain:

Spain’s exhibit at the show this year, ‘The Pazo’s Secret Garden’, by Rose McMonigall, celebrates Galicia, its Pazos, the camellia, and the distinctive Albariño wine of the region and provides an exquisite example of what your Pazo garden could look like.

Known as ‘the land of camellias’, Galicia is a renowned destination for lovers of the outdoors and garden enthusiasts. Camellias have become such an integral part of the region that visitors to Galicia can follow a dedicated ‘Camellia Route’; a journey that passes from northern to southern Galicia through 12 manor houses (or Pazos) and gardens where the camellia reigns in all its glory.

Covered in lush greenery, with some of Spain’s most idyllic, natural beaches; home to a number of buzzing, charming and characterful cities; one of the top (though lesser known) wine producing regions in Spain, famous for the delicious Albariño white wine; and offering up arguably the best seafood in the country, Galicia is a must-visit destination.

To purchase tickets for the RHS Hampton Court Palace Flower Show, visit: www.rhs.org.uk/flowershows and for more information on Galicia or other regions of Spain visit http://www.turismo.gal or http://www.spain.info respectively