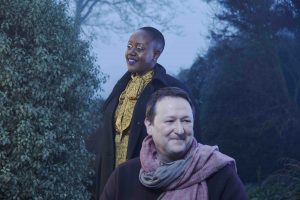 Millions of ITV viewers are getting a flower-powered telly treat during January with an important underlying message, thanks to a unique collaboration between broadcaster and garden/landscape designer Mark Lane, and collage artist Sharon Walters.

In an ITV-first, two creatives from different industries have been chosen to craft the logo ident shown between programmes on the channel.

Mark and Sharon teamed up late last year to create the collaborative biophilia-based ident which combines hand-crafted paper cut collage and landscape design. Inspired by the beneficial power of nature, plants in Mark’s Kent garden and Sharon’s love of plants and flowers, the pair reinvented the ITV logo using an intricate layered collage. Their creation was then enlarged (4m x 8m) and temporarily installed for filming in a silver birch woodland at Fullers Mill garden near Bury St Edmonds in Suffolk, owned by horticulture welfare charity Perennial.

The ident, which will be broadcast throughout January on ITV, aims to encourage viewers to pause, reflect and exhale whilst enjoying the simplistic, natural beauty of the work.  Entitled ‘Layered Exhaled Expressions’, the project also raises the issues of accessibility, identity and ethnic diversity, and the effects of climate change.

Mark, who is the UK’s first garden designer to be in a wheelchair, said: “Sharon and I are from communities often described as marginalised and through this collaboration we highlight ability in disability and the identity and power in blackness, and the diversity in both.

“Last year was awful for so many, and with our already complex modern lives submerged into unimaginable challenges, we wanted to create a collaborative work that would encourage people to slow down, relax and breathe.

“The concept was that paper would return to the woodland, illustrating renewal, sustainability and biodiversity, and displaying the journey from root, to tree, to final use. I also knew of the perfect spot for the ident installation, a stunning woodland at Fullers Mill. The natural world, flora and fauna, have an incredible ability to improve our mental and physical well-being and we hope our collaborative creation brings just a little of this biophilic power into people’s living rooms.”

Sharon said: “By first creating a hand-cut ITV logo stencil, I initially used a layering of images approach by cutting and gluing new sections until the design felt complete. This method proved difficult to transfer to the scale Mark and I envisaged, so I returned to the ITV template, this time creating a collage using real flowers and foliage. I had used this creative process previously in pieces for my ‘Seeing Ourselves’ series and it worked perfectly for the new ITV project.

“To recreate the design to a larger scale I photographed the work so it was ready for Mark to transfer to his landscape design CAD programme where large-scale pieces were planned and designed. This was a truly collaborative approach at every stage, and Mark and I have become great friends throughout this process.”

About Mark Lane – Mark is the UK’s first garden/landscape designer to be in a wheelchair. He is a regular presenter on BBC Morning Live, QVC and BBC TV Gardeners’ World and also fronts BBC TV coverage of the RHS shows. Mark graduated from University College London in Art History with B.A. (Hons). Mark had a meteoric rise in publishing becoming the Publishing Director for the Royal Institute of British Architects (RIBA) and the Managing Editor for the leading international Arts publisher Thames & Hudson. In 2001 Mark was in a car accident and had to have operations on his spine, which were complicated by him being born with spina bifida. Following a long rehabilitation period at the Royal National Orthopaedic Hospital, Stanmore, Mark studied landscape design through an Open Learning course at KLC, Hampton Court. He passed with distinction and set up Mark Lane Designs Ltd, an award-winning landscape design practice (Landscape Designer of the Year 2020). Mark is also an Ambassador for 4 charities, Patron and a Trustee for 2 other charities, with a strong emphasis on social and therapeutic horticulture, gardening and health and wellbeing. A prolific writer, Mark’s new book ‘Royal Gardens of the World’ has just been published by Hachette (UK).

About Sharon Walters – Sharon  is an artist, freelance educator, and museum professional. She graduated from Central St Martins in 2011 with a BA in Fine Art, holds a Post Graduate Teaching and Learning Certificate in post-16 citizenship education from the Institute of Education, and a BA in Social Science from University West London. Since January 2018 Sharon has been working on a mixed media collage series entitled ‘Seeing Ourselves’, now with over 250 pieces in the collection she has exhibited in a number of public spaces including the Mall Galleries, NOW gallery in Greenwich and the New Ashgate Gallery in Surrey. In December 2019 Sharon won the Reach Art prize for excellence in the arts, diversity, and social inclusion. ‘Seeing Ourselves’ explores identity, beauty standards, representation, and natural Afro hair. Her limited- edition prints and bespoke collages have been acquired by collectors globally, and she has delivered collage workshops for clients including the National Trust. Sharon makes hand-assembled collages almost daily to be present, reflective, and mindful. Each collage gives her permission to ‘take up space’ even in places where she so often does not see herself represented. By exploring diverse narratives through partnerships and providing platforms for under-represented voices to be heard, Sharon has had several collaborations with artists, organisations and groups which have developed both her art practice and community outreach work. The fluidity between the two has developed over the years through working with people in various settings. The ‘Seeing Ourselves’ series continues with a number of new and innovative collaborations in the forthcoming months.