Exbury Gardens in the New Forest will be encouraging visitors of all ages to learn more about the natural world this year with a programme of wildlife-themed activities, and a new Dragonfly Pond education area and steam railway stop. 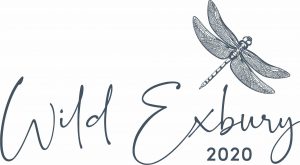 Building on the success of its 2019 centenary, the 200-acre woodland garden will be running a Wild Exbury programme of events when it opens for the season on 14 March until 1 November 2020. Visitors will get the chance to track wildlife around Exbury, learn bushcraft skills, pond dip, and identify rare plants and trees, as well as native wildflowers.

A Dragonfly Pond learning zone, with floating pontoons for visitors to walk on so they can get close to the wildlife action, will be unveiled. Designed with the help of the UK’s leading dragonfly experts*, this area will boast interpretation boards filled with dragonfly facts and take-away tips on how you can encourage these wonderful creatures into your own back garden. An existing, large ornamental pond in the gardens has been adapted for the insects with dragonfly-friendly, native aquatic and marginal plants.

Dragonflies are crucial bio-indictors of the health of the UK’s rivers, canals and ponds, but modern-day development, drainage and climate change have meant their numbers have fallen dramatically. By creating a dragonfly education space, Exbury Gardens hopes to boost awareness of their plight and inspire visitors to help protect them. Exbury’s Dragonfly Pond area will also include an outdoor shelter which will act as a classroom for local groups and school children. The zone will be open to visitors from late spring.

And steam railway buffs will be chuffed as Exbury’s famous Rhododendron Line steam railway will now be able to stop at the Dragonfly Halt platform, so visitors can easily disembark to explore the new pond area.

Other developments at Exbury in 2020 include a new Birch Walk leading down to Jubilee Pond, and a refurbished Iris Garden containing hundreds of stunning new iris plants, and tree ferns.

Thomas Clarke, head gardener at Exbury, said: “The gardens at Exbury are rightly famous for their unique plant collections but they also offer visitors a wonderful opportunity to get closer to nature. We have 200 acres of incredible woodland gardens, wildflower meadows and ponds to explore, plus lots of wildlife to spy.”

Created by Lionel de Rothschild in 1919, a passionate collector of plants and a keen supporter and sponsor of the early 20th century plant hunters, Exbury has grown to become a stunning garden paradise filled with rare plants, shrubs and trees. Its Centenary Garden, designed by Lionel’s great grand-daughter and RHS gold medal award-winning designer, Marie-Louise Agius, opened to the public last year, as did the River of Gold, around 150,000 mainly yellow spring bulbs planted in the lawns, weaving around rare trees near Exbury House, to give a colour burst.

Exbury is most famous for its unrivalled collection of rhododendrons, camellias and azaleas. Thousands of rhododendrons have been planted over the years and well over 1,000 hybrids have been raised by three generations of the Rothschild family.

Exbury Gardens, located in the New Forest near Southampton, is open daily from 14 March 2020 until 1 November 2020 10am – 5.30pm. Full information at www.exbury.co.uk Thanks to its unrivalled collection of rhododendrons, azaleas and camellias, Exbury Gardens is famed for its riot of spring colour, as well as a vast array of beautiful, mature rare trees. Over recent years the Hampshire garden has been expanded for all-season interest with areas designed to show off summer and autumn ‘flower power’, as well as an extension of its 1 ½-mile Rhododendron Line steam railway.

* Ruary Mackenzie Dodds and his wife Kari de Koenigswarter are leading dragonfly experts. Ruary is a Dragonfly Ambassador for the British Dragonfly Society, having opened Europe’s first public Dragonfly Sanctuary, published two books on the species and appeared on BBC Springwatch. Kari co-wrote The Dragonfly-Friendly Gardener with Ruary, and compiled the British Dragonfly’s Information Pack for Schools. She has also run courses on identifying dragonflies. The couple spend part of the year raising the importance of dragonflies as bio-indicators in New Zealand.

Created in 1919, Exbury has grown to become a stunning 200-acre garden paradise filled with rare plants, shrubs and trees, and renowned for its colourful rhododendrons. Lionel’s passion for collecting and breeding plants, and his support and sponsorship of the early 20th century plant hunters, was key to its horticultural diversity.

During a visit yesterday afternoon (Wednesday 10 July), His Royal Highness was given a tour of the new Centenary Garden by its award-winning designer Marie-Louise Agius, Lionel’s great grand-daughter. He also met members of the Rothschild family who still live at Exbury, the gardening team, estate staff and volunteers. 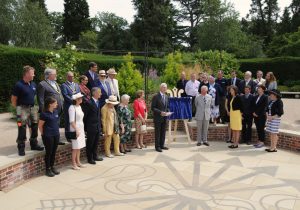 Marcus Agius giving a welcome address to The Prince of Wales with members of the de Rothschild family, Exbury Estate staff and guests at the Centenary Garden opening

Contemporary in style, the Centenary Garden contains subtle nods to the Rothschild family history and has been planted with a particular focus on mid to late summer. It was planted two years ago in an old tennis court, almost at the centre of Exbury Gardens, and was carefully hidden from public view whilst it grew and matured. Now open to visitors, its scores of beautiful shrubs, climbers and perennials are in full bloom, providing a peaceful and fragrant spot for the public to explore.

His Royal Highness was introduced to members of the team who built the new garden, as well as the gardeners and local volunteers who now tend it, before unveiling a commemorative plaque.

To mark his visit The Prince of Wales planted a drought-resistant ornamental beech tree (Fagus orientalis) within Exbury’s grounds, following in the footsteps of Her Majesty The Queen, The Duke of Edinburgh, The Duchess of Cornwall, Princess Margaret and Her Majesty Queen Elizabeth The Queen Mother, who have also planted trees at Exbury.

Lionel de Rothschild, grandson of Exbury Gardens’ founder and current chairman of Exbury Gardens Trust, said: “We are deeply honoured that His Royal Highness The Prince of Wales has opened the new Centenary Garden. Over the past one hundred years, members of the Royal Family have been welcomed a number of times to Exbury Gardens to enjoy their beauty and to plant commemorative trees.”

Marcus Agius, chairman of the Board of Directors of Exbury Gardens, said: “We are delighted that His Royal Highness met our gardening team and the volunteers who work so diligently to keep Exbury Gardens looking beautiful throughout the year, as well as the contractors who constructed the new Centenary Garden. This is a garden that has been built to stand the test of time and we are thrilled that visitors can now explore and enjoy it.”

As well as the opening of the new Centenary Garden, centenary celebrations at Exbury have included an award-winning Exbury Gardens display at the recent RHS Chelsea Flower Show with Millais Nurseries, a new history exhibition at Exbury’s visitor entrance, and the planting of over 100,000 bulbs which bloomed in time for the 2019 season opening.

Exbury Gardens, located in the New Forest near Southampton, is open daily until 3 November 2019 10am – 5.30pm. Full information at www.exbury.co.uk Thanks to its unrivalled collection of rhododendrons, azaleas and camellias, Exbury Gardens is famed for its riot of spring colour, as well as a vast array of beautiful, mature rare trees. Over recent years the Hampshire garden has been expanded for all-season interest with areas designed to show off summer and autumn ‘flower power’, as well as an extension of its 1 ½-mile Rhododendron Line steam railway.

Centenary Garden – designed by Marie-Louise Agius, an RHS gold award-winning designer and helped realised by her team at Balston Agius Ltd; the garden is a contemporary, intimate space, focusing on late flowering summer perennials, interwoven between a strong vertical planted structure, with the existing yew hedging proving an evergreen backdrop. The central area is sunken, enhancing the three dimensional space, with the Rothschild 5 Arrows coat of arms in black Caledonian slate set into York stone paving. At the far end of the garden is a curved timber bench surrounded by cloud-pruned evergreen azaleas, a modern salute to the core history of the Gardens. Just over 2,000 plants have been used. Key structural plants include Gingko biloba ‘Tit’ – running through the main planting beds; Heptacodium micanoides – the pair of multi-stemmed trees in the far end bed;  Hydrangea paniculata ‘Limelight’ – en masse at the far end around the Heptacodium; Rhus typhina ‘Tiger eyes’ – contrasting with the existing Yew in the north-west corner, and Miscanthus ‘Graziella’ – running in swathes between the Gingkos. 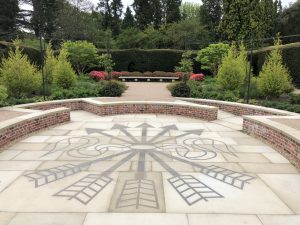 Exbury Centenary Garden, built and grown in secret, now open to the public

Hampshire’s Exbury Gardens is marking its centenary with the unveiling of a new ‘secret’ garden and plans for a showcase display at the world’s most famous flower show, RHS Chelsea.

Created by Lionel de Rothschild in 1919, a passionate collector of plants and a keen supporter and sponsor of the early 20th century plant hunters, Exbury has grown to become a stunning garden paradise in the New Forest filled with rare plants, shrubs and trees.

Now its gates are open to the public for the 2019 season, visitors can get their first glimpse of a new Centenary Garden designed by Lionel’s great grand-daughter and RHS gold medal award-winning designer, Marie-Louise Agius. This was planted within Exbury Gardens in 2017 and has been carefully hidden from public view, whilst it grows and matures. Contemporary in style, it contains subtle nods to the family history and has been planted with a particular focus on late summer.

A stream of spring bulbs is also starting to bloom. Around 100,000 yellow and blue (Rothschild family colours) bulbs have been planted in the lawns, weaving around rare trees near Exbury House, to give a centenary colour burst including daffodils, crocus and bluebells.

Visitors can get the chance to learn about the extraordinary story behind this garden which was originally created over just 20 years before the outbreak of WW2 in a special exhibition next to the main entrance and ticket office.  An official history book will also be published later in the year.

Exbury’s famous rhododendrons will be showcased at RHS Chelsea Flower Show in May 2019 in a collaboration with experts Millais Nurseries. Exbury and Millais have been working together to conserve some of the more rare and threatened rhododendrons in their collection. The display will aim to evoke the ‘spirit’ of Exbury Gardens.

Thomas Clarke, head gardener at Exbury, said: “The 1920s were the golden age of woodland gardening and Exbury, under the careful eye of Lionel de Rothschild and his staff, was at the cutting edge of this movement. The location, climate, existing oak woodland and acid soil all allowed for the creation of one of the finest gardens of its kind in the UK. Combine this with the legacy of the great plant hunters, and the extensive plant breeding programme at Exbury, and we are fortunate enough to have inherited a truly wonderful garden packed full of horticultural treasures.

“In this centenary year we are delighted to be unveiling some fantastic new projects plus a continued focus on our work to conserve and develop the plants and landscape at Exbury for the next 100 years.” 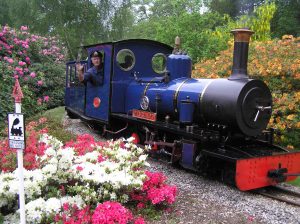