Yorkshire’s famous horticultural landmark Newby Hall is set to get an extensive rock garden facelift, thanks to a major restoration scheme being led by new head gardener Phil Cormie.

Phil Cormie has joined Newby’s team from North Yorkshire’s Himalayan Garden & Sculpture Park and the first task on his ‘to do’ list is to crack on with transforming the overgrown historic rock garden area.

Built before WW1 when the new trend for rock garden construction was at its peak, Newby’s rock garden includes a waterfall, stone bridge that doubles as a miniature aquaduct and many vast rocks covered with rare plants and trees. Ellen Willmott, the visionary Edwardian plantswoman and a great friend of Newby’s owners at the time, was integral in its conception and construction. Work on the garden ceased in 1914 when many of the Estate workers signed up for Kitchener’s Army, heading off to France. Sadly, many did not return. 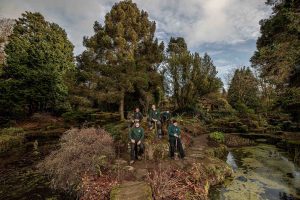 Over the years, plants and trees in the rock garden have matured and outgrown the space and now, over a century later, the area will once again become the main focus for the Newby garden team. Working closely with specialists Kevock Garden Plants & Design, Phil Cormie, and Newby’s owners Richard and Lucinda Compton, aim to transform the space to ensure it is conserved for generations of visitors to come.

With a team of six, Phil Cormie is keen to ensure Newby remains one of the best gardens in the UK. He said: “The chance to play a part in shaping the spirit and the story of Newby Hall was irresistible. I am delighted to be involved in this exciting and important project, to protect and enhance one of Britain’s finest gardens. Visitors have a real love for Newby Hall so my aim is to provide a real floral spectacle as well as enhancing the beauty and romance of the garden.

“Transforming and renovating the rock garden is a huge project and causes quite a dilemma as it’s obviously important to retain the spirit of the place. The overgrown tree canopy did give the air of a secret garden but this caused the herbaceous underplanting to be wiped out due to a lack of sunlight. There are no original plans or planting schemes so we are trying to interpret what we believe to be the original vision for the rock garden – huge rocky outcrops with intimate planting pockets for unusual alpines. By removing some of the tree canopy, we have already started to unveil the scale and drama of the rock faces which are spectacular!”

Newby was recently crowned the Historic Houses Garden of the Year and its much-loved gardens are visited by over a hundred thousand people every year and often feature on film and TV. Taking centre stage is the eye-catching 172-metre-long double border, celebrated for being the longest in a private garden in the UK, plus 14 other stunning garden ‘rooms’, two heritage orchards and 30 acres of woodland.

Already a star of film and screen productions such as Peaky Blinders, Victoria, Gentleman Jack and the ABC Murders, Newby Hall will step further into the spotlight later this year when the popular three-day Harrogate Autumn Flower Show permanently moves site to its grounds.